Fleuroselect members submitted no less than 70 varieties of Cucurbita pepo into the ‘Year of the Courgette’ trials in 2021. These were held last year at two Royal Horticultural Society (RHS) gardens in Bridgewater and Rosemoor in the U.K. The main varieties trialled were the bush types which are firm favourites with the home gardener and allotment owner. They come in various sizes, shapes and colours, from elongated to round and from yellow to green, and even feature striped versions. Courgette flowers are also becoming increasing popular as ornamental edibles.

After careful judging by the RHS technical committee, the following varieties were awarded the coveted RHS Award of Garden Merit:

The following varieties were re-confirmed as retaining their RHS Award of Garden Merit Status:

The judges were particularly impressed by Cucurbita pepo Orelia, confirming that it is indeed one of the best existing varieties currently holding the Award of Garden Merit. 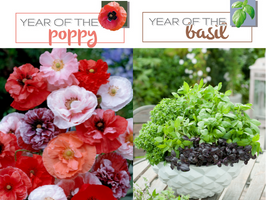 'Plant of the Year' Campaign

Starting in 2015, Fleuroselect annually nominates a flower and vegetable of the year in the ‘Plant of the Year’ campaign. The intention of this campaign is to raise awareness of specific crops for home gardening, while showing the wide choice of varieties available to the consumer. The current ‘Plant of the Year’ crops in 2022 are Poppy and Basil. 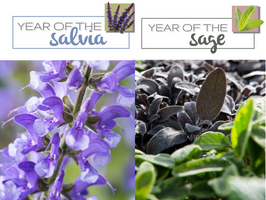 'Year of the Salvia and Sage'

In 2023, Fleuroselect will introduce the 'Year of the Salvia and Sage'. Fleuroselect members will soon receive an invitation to submit their varieties. Extensive displays will be planted in renowned public gardens where consumers can enjoy the diversity of this species. Accompanying information will be rolled out when the 2023 promotion initiative kicks off.