Within the framework of the '2020, Year of the Rudbeckia' home garden marketing campaign, Fleuroselect together with Peter Seabrook, broadcaster and gardening editor at The Sun newspaper, planted a trial of over 80 Rudbeckia varieties at the Royal Horticultural Society's garden Hyde Hall in Essex, U.K. 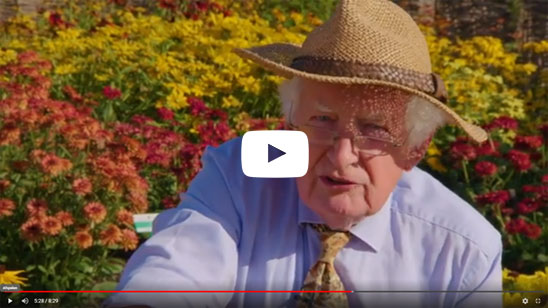 The trial includes 45 seed-raised varieties and 35 varieties from cuttings, all supplied by Fleuroselect members. In addition to being a source of gardening inspiration for many visitors, the trial has been judged by a distinguished panel of experts and the RHS Award of Garden Merit will be awarded to the very best varieties. Members of the public have also been encouraged to choose their favourite in a 'People's Choice' election. The results of both elections will be announced shortly.

In this delightful video, Rob Brett, Curator at Hyde Hall welcomes viewers to garden. Simon Crawford, Commercial Director at Burpee Europe and Chair of the Fleuroselect Home Garden Group points out the main highlights of the seed varieties which have been particularly outstanding including new Gold Medal winner Rudbeckia Amarillo Gold and Rudbeckia Viviani. He also praises some of the older varieties such as Toto Gold and Autumn Colours. Peter Seabrook then expands on just how far breeding in Rudbeckia has developed in the cutting-raised varieties showcasing the splendour of the SmileyZ™ and Sunbeckia® ranges.

In addition to the Hyde Hall location, similar trials were planted at RHS Harlow Carr, Egapark in Erfurt and Blumeninsel Mainau in Germany, the Jardin des Plantes in Paris and TEGEASC research centre in Dublin, Ireland. RHS Harlow Carr also has a full judging panel for the RHS Award of Garden Merit.

Shot on one of the last days of summer, this film shows just how much colour and pleasure Rudbeckia can bring to the garden right up until the end of the season.