Fleuroselect was founded on 29 May 1970 at the first Convention held in Frankfurt, Germany with S.N. Groot as President, J. Ohlsen as Treasurer and R. Troost of the Dutch Seed Trade Association as Secretary. The Association set up a trial system with independent judges for originators and distributors across Europe. A mutual Gentleman's agreement served as protection to the breeders. Furthermore, Fleuroselect would promote and publicise new varieties via Gold, Silver and Bronze Medals. All founding members put forward an interest-free loan of DFL. 10,000. In 1972, the first Bronze Medals were awarded to Pelargonium ‘Sprinter’, Dianthus  chinensis ‘Snowflake’ and Lavatera trimestris ‘Tanagra', followed by a first Silver Medal in 1978 for Lavatera trimestris 'Silver Cup' from Sluis & Groot. In 1977, the still standing agreement with AAS regarding the assessments of the double winners was set up. Failed attempts to change the exclusive distribution rules lead to the appointment of a Fleuroselect Secretary General in 1987. The Quality Marks saw their introduction in 1988, followed by the first Pack Trials in 1989. The first real Gold Medal winner, Coreopsis grandiflora 'Early Sunrise' from W. Atlee Burpee was awarded in the same year after which Fleuroselect decided to replace all former Silver and Bronze medals by Gold Medals. 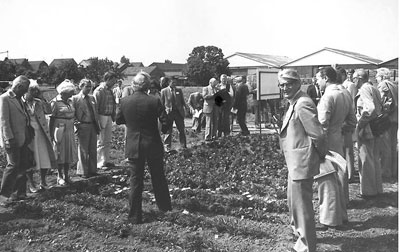 In 1990, full membership opened up to seed breeders from outside of Europe and in 1991 Fleuroselect set up its own offices - separately from the Dutch Seed Trade Association. As of 1992, young plant producers became more actively involved and 1998 marked the founding ofFleuroProtect to provide services in the area of Plant Variety Protection with Albert Stuurman as President. This opened up the organisation to breeders and producers of vegetatively propagated varieties and the Petunia project in the following year was the first policing of illegal propagation. In 2001, the first pot plant trials were organised. In 2002 Fleuroprotect was disbanded and its members welcomed into Fleuroselect.

2003 Marked a big step for Fleuroselect as it changed its organisational structure from representation per country to representation per business activity: Breeding, Distribution to Growers, Distribution to Consumer Markets and Protection/Policing (ex-FleuroProtect). The first trials of cutting raised items took place in 2003. and the B.U. Distribution to Growers set up its first bedding plant survey in 2005. In 2006 the first Breeders Conference took place in Geneva. Two years later this was followed by the first Young Plant Producers' Meeting. 2009 marked the first edition of the FleuroStar Contest.

With the Gold Medals rewarding genuine breakthroughs in breeding and the FleuroStar awarded to the plant with the greatest wow-factor and visual impact, Fleuroselect strives to assist its members in the promotion of the best ornamental plants.